Home|Journal | The lotus weavers of Myanmar

The lotus weavers of Myanmar 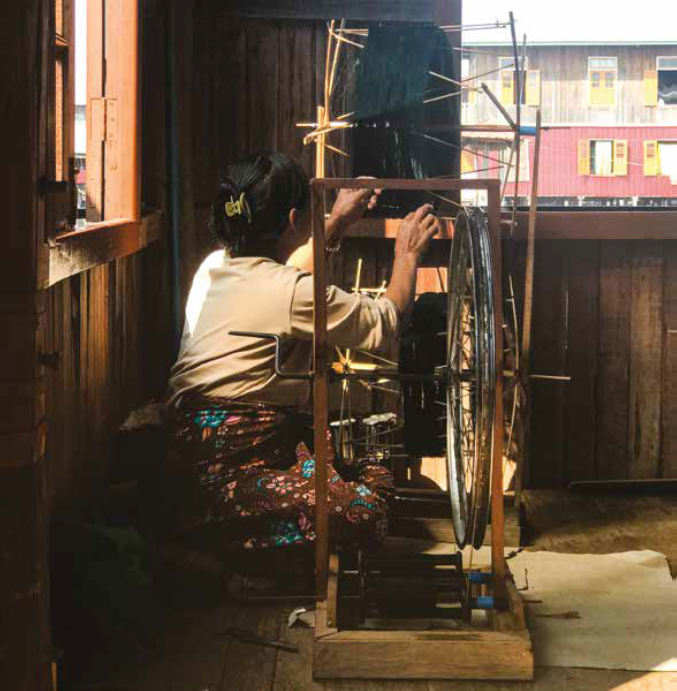 Inle Lake, in the centre of Myanmar, just beneath the Shan hills, is a magical place. Covering just over 100 square kilometers, and only 5 feet deep, the still waters have become fringed by a series of canals, narrow channels weaving between floating gardens and great swathes of water plants. Boats glide from village to village, taking the growing number of tourists on a voyage of a lifetime, from gold pagodas and monasteries to the workshops of boatmakers and silversmiths.

The 170,000 people who live around Inle Lake mainly fish and farm and most live just above subsistence level. Yet, in the wooden stilted village of Innpawkhon, in buildings patched with old discarded signs, one of the most expensive fabrics in the world is being produced. Fabric which sells for several thousand dollars per suit length. It is a cloth made entirely from the sacred red lotus plant. Innpawkhon has long had a weaving tradition, first in cotton and then silk – creating high quality exclusive designs which sold in Yangon.

Then, about 100 years ago, a skilled weaver called Daw Sa Oo noticed that the fine fibres inside a lotus stem would twist into thread. She decided to make a robe for the Abbot of a local monastery and over the next year took the fibre from over 200,000 lotus stems, rolling it into fibre and weaving a beautiful cloth.

The task was a symbol of her devotion. From the selecting of the lotus – a buddist symbol of purity – to the drawn-out process of preparing the fibre and weaving the cloth it was a spiritual undertaking, a way of showing devotion.

Lotus stems must be gathered in the morning – preferably in monsoon season when the water level is high and the stems longer. Lotus must be used within 3 days or it becomes too dry and water is added continuously during weaving to keep the fibres cool.

Each stem is cut into lengths and held by the woman preparing the fibre in bundles of 5. She then nicks each stem with a knife and snaps it, drawing all the fibres gradually out of the stem and placing them on a board before cutting them to length. The fibres are twisted, dampened and rolled together on a wood surface to form the thread, each half metre length glued and waxed and twisted to the next until great ropes of thread are coiled, stored in a plastic bag to retain humidity. This is the most skilled job in the process, it is done by the most experienced of the women, with 6 women needed to prepare lotus fibre for every loom.

Spinning machines – fashioned from bicycle wheels – then prepare the fibres for warping the looms, keeping the threads in a single 40 metre length is a skilled process. The weaving itself is done on Cambodian style looms, 60 cm wide.

From the 1920s until the 1990s lotus cloth seems to have had a purely devotional purpose – as monks robes or to dress statues in the weaving workshop’s gift shop will cost $300. The Italian company Loro Piana makes a jacket from lotus fabric that retails at almost $6,000. The most expensive item of clothing I now own is a silk scarf with thread stripes of lotus every few inches.

Where the symbolism of the lotus flower and the devotion of the making were the important things when the fabric was seen as a of buddha. Then, in late 1990s, tourism increased in the area – it became possible to get a visitor’s visa for longer than a week, holiday resorts were built on the bank of the lake and the workshops began to cater for tourists. And where the lotus cloth had been devotional because of the long time it took to make it now became attractively financially exclusive for exactly the same reason. In a country where the average daily wage is around $5, a lotus scarf spiritual expression, the most used words in the contemporary Western descriptions are eco, organic, expensive, exclusive. Myanmar’s Buddhists prize the protective purity of the cloth, which is reputed to make the wearer calm, peaceful and meditative, as well as protect him from heart problems and headaches. Western buyers talk instead of the fabric being crease free and stain resistant, perfect for holiday packing.

Traditionally, when the making of the fabric was purely devotional – intended for Buddahs and monks – offerings were left to the lake before the harvesting of the lotus. Nine dishes of food would be left on the banks the week before and again after harvesting – a formal gratitude that would have preserved the spirituality of the cloth.

It reminds me in many ways of the way that C18th dyeworks stripped the Highlands of their lichen as cottage-scale dye pots were scaled up to factories, or the way that our management of trees turn from an ever-renewing coppice to a clear felled plantation. Of the way that uncontrolled foraging has threatened many wild plants here in the UK as ‘wild food’ became fashionable and a commercial price was put on what had been free. A move from a feeling of reciprocity and devotion towards commerce.

The lotus in Lake Inle cannot keep up. Already lotus stems are being brought in from other parts of Myanmar to fulfil demand. A square metre of cloth takes 20,000 lotus stems to produce. That is a lot of lotus.

I’m not at all sure of the solution – Inle Lake is one of the UNESCO World Network Biosphere Reserves, a demonstration of a natural environment and people living in harmony. The area is poor, tourism is an important resource, the market for $300 dollar scarves and $6000 jackets is obviously strong.

It would be a great pity if a craving for a luxury product destroys the culture and environment that it comes from.

Would you some seasonal goodness in your inbox each Friday?