Home|Blog | Tansy - its history and use 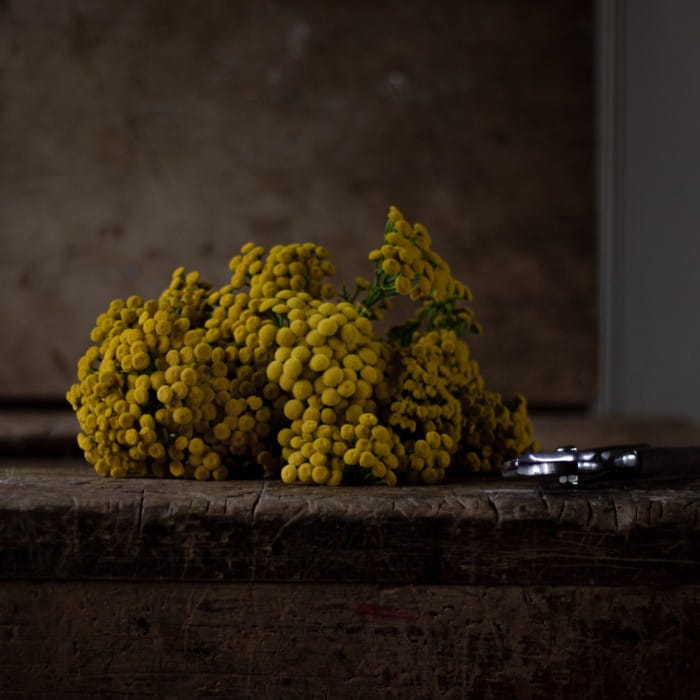 Tansy (Tanecetum vulgare) grows in the Studio Meadow - flowering through July and August, bright buttons of mustard flowers amidst the grass. It is in two large clumps, one at the top edge of the path, one down by the studio door. I think it must have been part of the original wild flower mix that we threw down on the bare soil right at the beginning. Here, in the damp cool Scottish climate, in our heavy soil, it spreads gently, it is gradually moving down the slope. In hotter countries though it multiplies faster - self seeding in light soils, bulking up fast. In many States in the US it is on the lists of noxious weeds.

Here in Scotland though it was an important useful plant in past centuries - one of the home herbal plants that were grown in gardens. It often stands as a marker of a dwelling in the landscape, persisting through the nettles and docks, the ghost of a croft.

The Ancient Greeks were the first that mention Tansy as a medicine. Its common name is derived from the Greek word for immortality Athanasia - in Greek mythology Zeus gave the shepherd Ganymede a drink of tansy to make him immortal.

But the main uses for tansy over the years have largely been due to its toxicity - it produces the toxic ketone thujone, which is also in wormwood. Thujone is an insecticide, it can kill parasites, cause hallucinations and, perhaps not surprisingly, can also be fatal. The amount of thujone differs wildly from plant to plant, which must have made its use medically a bit hit and miss.

The main use of tansy in medieval times was as an insect repellent - the stems were collected and dried in August. They were then used as strewing herbs on the floor (along with meadowsweet), put between mattresses and sheets to deter lice, and made into a rub for raw meat to stop flies.

The dried flowers were worn in shoes and on belts for a wide range of ailments - but particularly for rheumatism and infertility in women.

The latter is ironic as tansy tea, basically what I have been boiling up in my dye pot this month, was one of the main methods of abortion from the thirteenth to nineteenth century. Illicit printed guides of the time suggested drinking tansy tea daily for a week to 'bring on delayed menses'. The infamous C19th New York abortionist Anne Lohman (Madame Restell) gave out concoctions of tansy and turpentine to her patients from her 5th Avenue consulting room. Relying on toxicity to work, these methods probably caused liver, kidney and brain damage, possibly even death, in many of women who resorted to them.

This natural toxicity also works in the garden - it will deter ants (if you really want to do that) and scientists looking for organic ways to deter the Colorado potato beetle in the US found tansy to be the most effective - planting it in strips surrounding the potatoes kept them beetle free. Ladybirds love it though.

Slightly peculiarly, given that it is well known to be poisonous, tansy has traditionally been used in cooking - it is associated with lenten cooking in the Christian church, and was cooked into Easter Day cakes as a reminder of the bitter herbs of the Jewish Passover.

I really wouldn't recommend eating it though as the toxic compounds vary from plant to plant and there is no way of telling.

I grow tansy as a dye material - weld, which is a traditional dye plant giving yellows, struggles in the Scottish climate so tansy has long been an alternative source of yellow dye. It gives a clear bright yellow which can then be over dyed with other colours like blue from indigo to give bright green.

I dyed some alpaca house socks for sale and a selection of wool for a striped jumper that I'm gradually knitting. It is a simple dye - simmer the flowers and/or stems for an hour and leave to cool then strain. I found that leaving it for a long time in the pan caused a saddening of the colour to a gold. 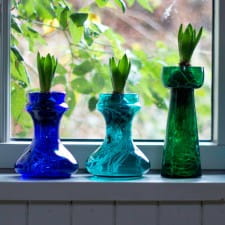 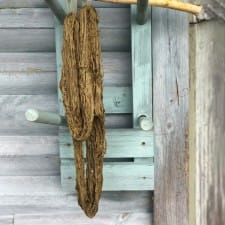 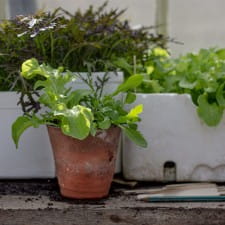 Grow your own salad leaf mix

I was delighted by this piece. I know a number of abandoned farm steadings with tall stands of tansy. I remember long ago we used to put stems in flower under the straps of the bridles of work horses pestered endlessly by "clegs" aka Horse Flies believing it to help repel the blood sucking pests.
Thank you.